.....an intersting fact, asserted by Paul Hostetter in this Mandolin Café topic : " Tiple trouble".
The brillant luthier consider that the makers builded all their tiples out of tune with full knowledge of the facts:

"One important point with tiple bridges, whether they're on Martins or Regal or L&H instruments, is that the parallel fret means they will never play in tune. Most people play them as a novelty item, not as a musical instrument, and it therefore won't matter. Whacking chords in first position, yes; above the third fret: ouch. " 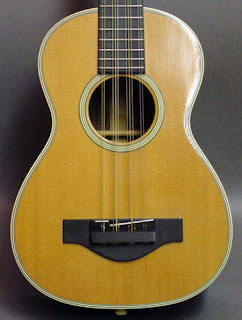 He  solve the problem with this particular bridge compensation , encouraging every tiple owner to do so for a perfect tuning ..... You thought your instrument was hard to tune because of unison and octave pairs and trios, maybe Paul is opening our eyes and ears....

I just discovered some direct application of Paul suggestion ....
Terry Staker built this gorgeous bridge ( all details in this Tiple intonation topic on Frets.net) : 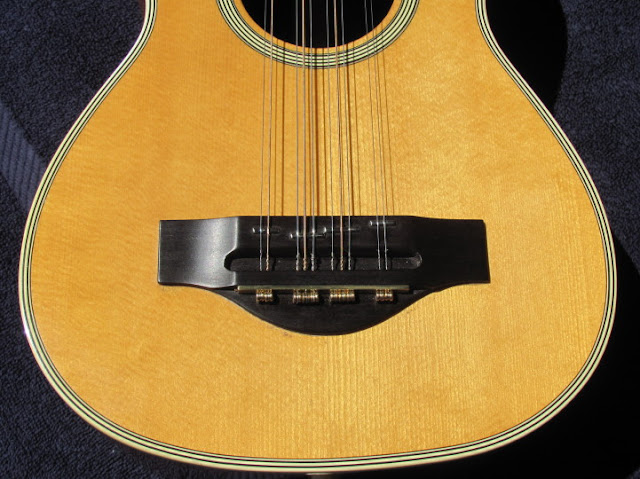 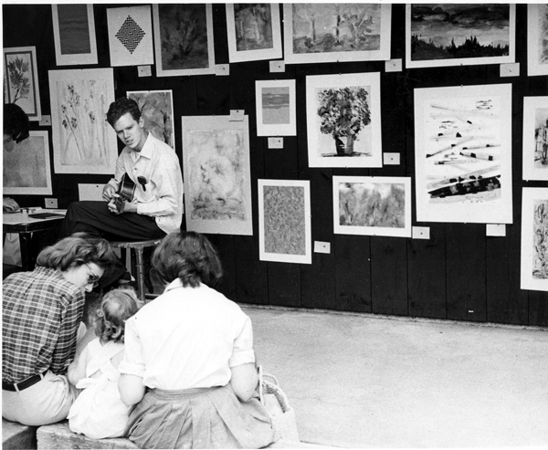 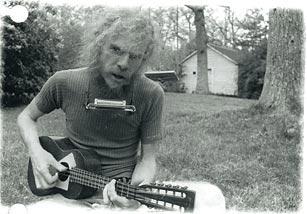 The most particular and unique tiple artist is with no doubt Ed Askew, the underground folk singer; also known for his paintings he travelled the last 50 years droping few tunes now considered as masterpieces.
Rediscoverd and honored by the new folk scene he's a pure songwriter, singing his poetry with an intense white voice and a strong folk-played tiple for only orchestration. 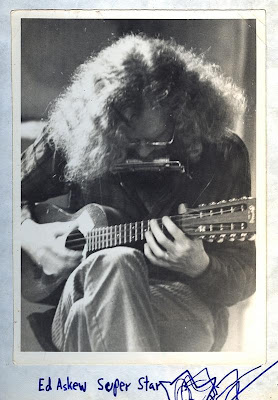 Two mythic "Psych-folk" LP's cames out in 1968 and 1970 "Ask the Unicorn" and "Little eyes", then later in 1984 he recorded "Imperfiction" on cassette but multi tracked, and "little houses" in 1986; the albums, recently reissued could be find easily.

His "life story" with the ten strings instrument began as he was a child and is nicely related in this article named "how I got my martin tiple" he wrote for the "fretboard Journal" in 2009, but the incredible full of karma and beloved T15 story , lost in a train, continues here, in a youtube confession….

We can find in a Jacob Kaplan 2011 interview this exchange about the tiple:

JK Did your tiple playing change between Ask the Unicorn and Little Eyes?
EA A little. I became more precise. I could pick out melodic lines. If you listen to [Little Eyes], the tiple playing is much more specific. The thing that kind of broke my heart was . . . I got really good at the tiple, later on. I got much better later on. But none of that ever got recorded.
JK I read somewhere that for you the very act of playing the tiple—something you don’t do much anymore—affects the way you sing, the timbre of your voice.
EA When I played the tiple I used to tend to dance, so that would have an effect on the way I sang. The whole thing was very intense, and the tiple’s loud. It doesn’t look loud, but it’s very loud. And I suppose it had to do with those songs.

and in a David Shirley article, The Ageless Poetry of Ed Askew
an interesting comment about the hardness of the instrument playability and it's implication in the artist personality :

The tiple's ten steel strings are tuned high like a ukulele, with which it shares a bombastic tone and lingering projection. Introduced by Martin in 1924, the instrument is notoriously difficult to play, and much of Ask the Unicorn's irresistible appeal involves Askew's heroic and not-always-entirely-successful attempts to keep the damned thing under control while simultaneously keeping up with the songs' relentless vocals. 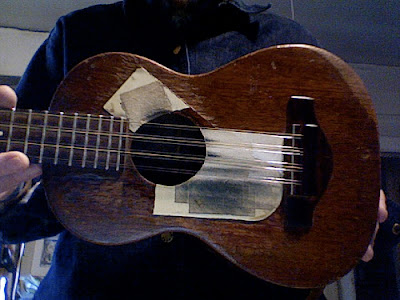 
In 2007 Ed hardly played the tiple and asks Joshua Burkett to play with him on this Set / interview appearence. 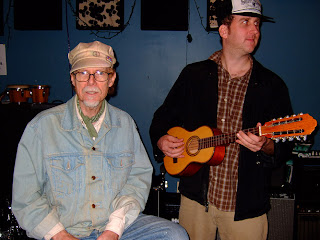 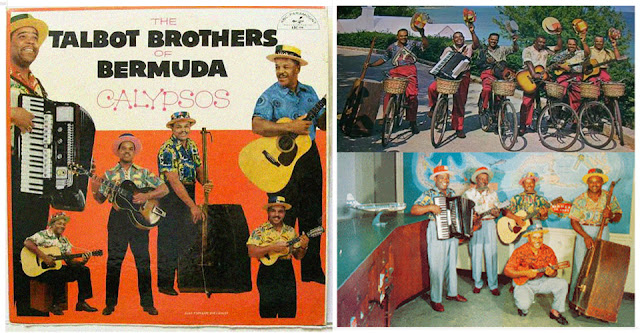 Despite of it's northern location, Calypso was introduced in Bermuda during the 40's as modern post-war aviation brought tourism in the islands.  The Talbot Brothers was at this time and for twenty years the trinidadian music indisputed ambassadors, mostly for white tourists in search of exotica. 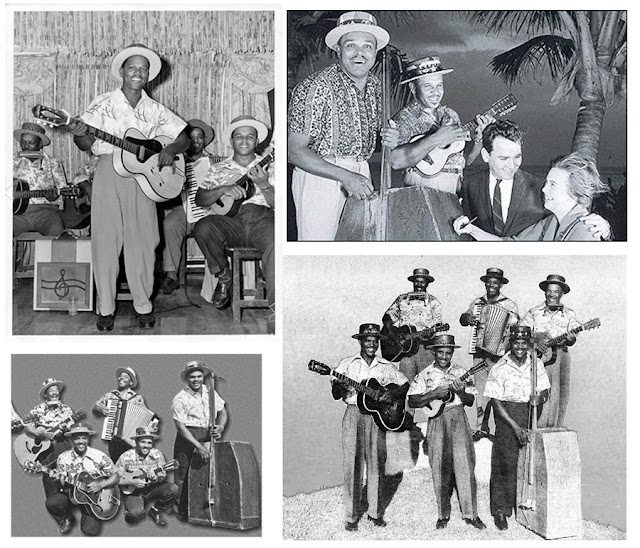 Five real brothers plus a cousin, they came with a particular Calypso instrumentation,
using a remarquable self made upright bass (as jamaicans use the marimbula for mento/calypso), accordion , harmonica and a Martin T18 tiple as mento players mostly use a small banjo.
Brian "Dick" Talbot is not well heard in the records, melted with the three guitars his tiple strumm is not clearly discernable but we have an exception with this "atomic" track from 1957:

At my opinion the sound engineer located Dick near from the microphone such as the voice / maracas .
A typical bouncy calypso strumm is played with an alternative mute/stroke right hand technique.
add by Uncle Emile at 8:08 AM No comments: 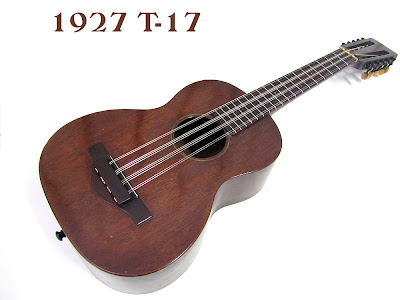 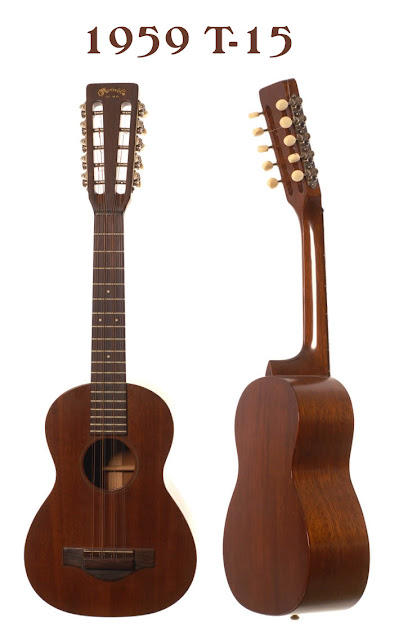 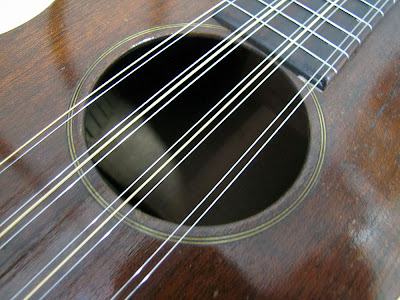 The simple B&W circles around the hole made the T-15/17 a direct cousin of the Martin Style-0 ukulele.
add by Uncle Emile at 10:46 AM 2 comments: