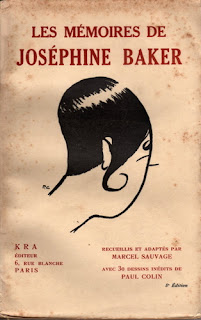 The 15 of september 1925, according to her 1927 memories, Josephine Baker was humming a verse from "Ukulele Lady" ...
I saw the splendor of the moonlight
On Honolulu Bay
There's something tender in the moonlight
On Honolulu Bay
as she was leaving New York aboard the "Le Berengaria" sailing to Cherbourg and a crazy international success for the next ten years and so on.... 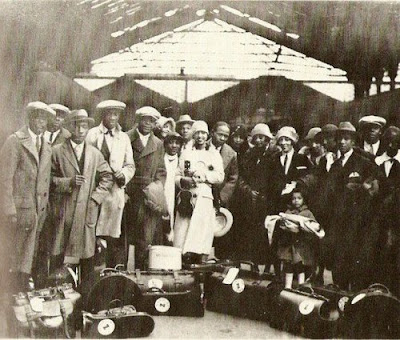 This photograph shows her with a nice white bended uke at her arrival in Paris with the cast of "La Revue Negre" Sept. 22 1925. She was another "uke friendly" artist of the 20's probably knowing tne basic chords of the instrument .... 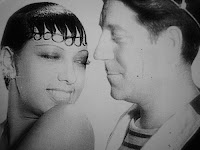 Nearly à decade after the "Banana nude"craze she was a beloved star in France, known for her foolish kindness and her 1931 tender hit "J'ai deux amours " writen by Vincent Scotto the french hitmaker ....
Marc Allegret and the "Zouzou" producers tried to recreate in 1933 the magic cocktail : sexotica/tenderness with this musical melodrama based in Marseille melting Cabaret family secrets & the 30's star Jean Gabin as a perfect sailor lover, and Scotto as composer ...but the film wasn't a success.

The magic tiple song sequence seems to be played by the star , a simple strumm with a touchy interpretation.... The decorated bidding could indicate maybe a Regal model ...but it's surely not a Martin. 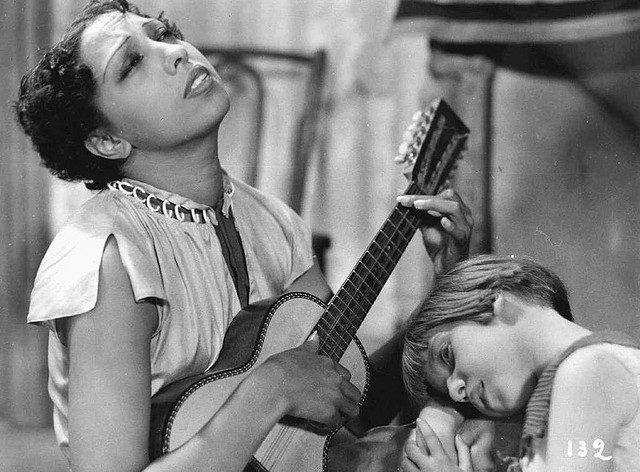 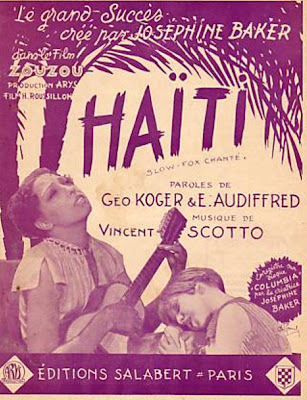 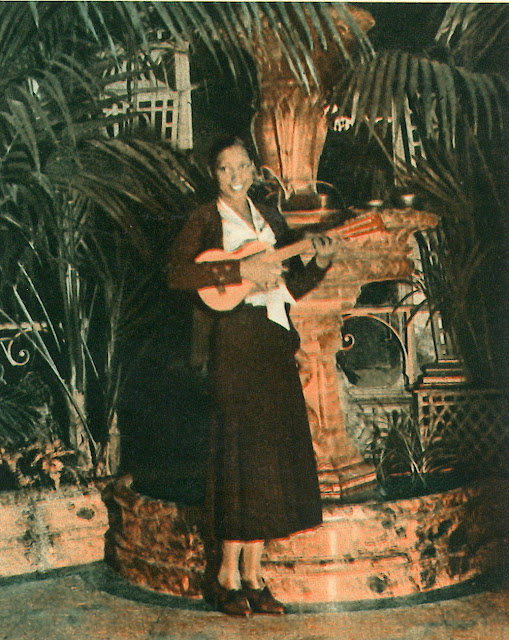 A beautiful film still, A Sheet Music for the over song of the film "Haiti" and a nice colored promotional photograph  all courtesy of Cyril Lefebvre collection
add by Uncle Emile at 2:28 AM No comments: 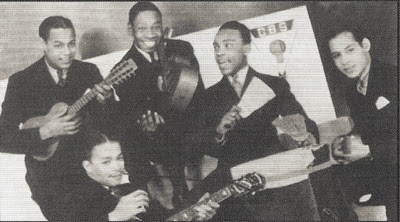 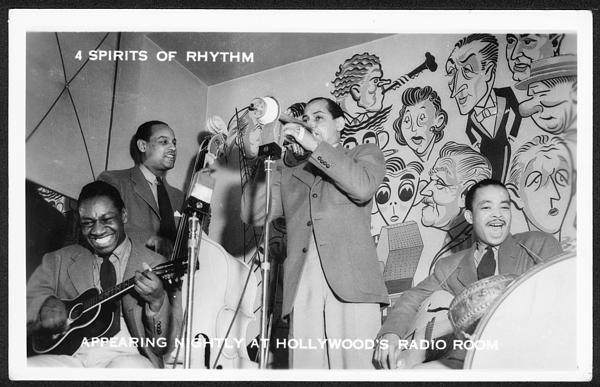 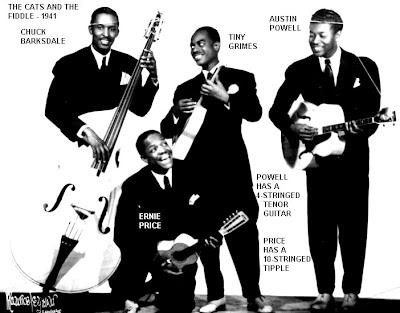 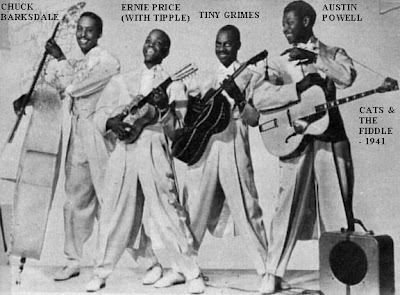 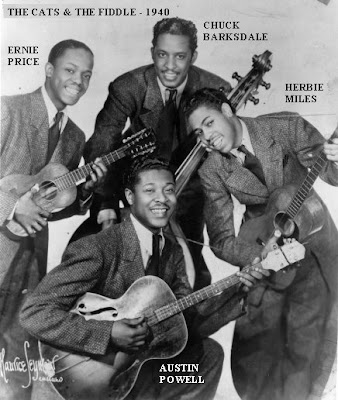 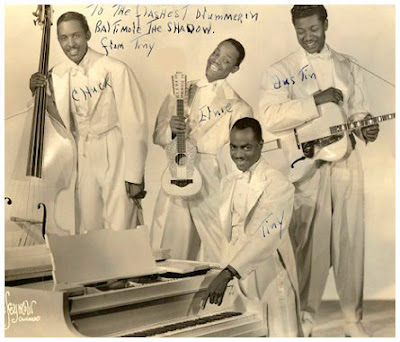 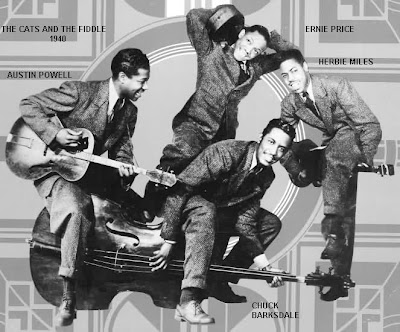 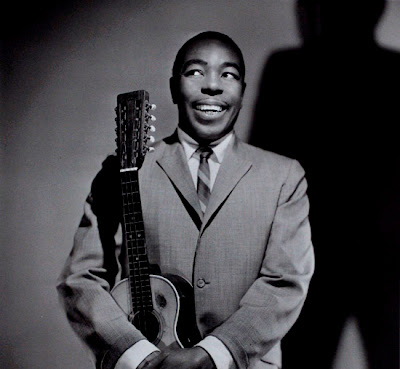 Timmie Rogers (Timothy Louis Ancrum) 1915–2006
Known as a pioneer of emancipated black stage comedy in the united states, he was also a tiple player and composer, adding songs in his shows during his entire career.
Back in the 20's dançing in the streets at 8 he joined the vaudeville circuit and was part of a successful dance duo in the 30's "Timmie & Freddie", probably learning uke & tiple in the early 30's as so many ...
Then, in the 40's & 50's he was the first black comedy artist acting alone, without blackface make up and stereotype racial clichés in front of a white audience … also known for his tuxedo wearing on stage and his famous"Oh Yeah !" gimmick.


He starts on TV Shows in 1949 "Sugarhill times" an "all stars" show with Belafonte, Armstrong, and guests as The Charioteers , probably singing & playing tiple…
Then during the 50's he appears many times with Jackie Gleason and later in the 60's in The Dom DeLuise Show.


Then, he shows up several times in the 70's "Sanford & son" sitcom with Redd Foxx (John Elroy Sanford) singing old times duos with an electrified T28 showing an humbucker style pickup betwin the neck and the hole, a pickgard and two buttons... probably a luthier customisation.

As a composer and singer he ran a parallel career, sharing scenes with Jazz artists he met Nat Cole and wrote for him “If You Can’t Smile and Say Yes, Please Don’t Cry and Say No” and for Tommy Dorsey “Everybody Wants To Go To Heaven, But Nobody Wants To Die" and probably much more for other artists.
As an interpret he started in the 40's with for example this patriot 1944"Bring Enough Clothes For Three Days"

Then during the RockN'Roll decade he recorded some hot 78rpm around 1957 for Cameo records "Take me to your leader", "Back to school again" but the notable one is here "I've Got A Dog Who Loves Me" with what I think is an open chord tiple strumm covering the entire song…..wow !! a real RockN'Roll tiple hit!
...the later soul funk "Chicken Back" sounds more like a lousy come back... of course without tiple.
The splendid black and white photograph come from this page :
an interview of his daughter Joy King were she report a small museum project in Portsmouth showcasing his father memorabilia, including the famous Martin tiple....is it the old 50's/60's T28 showing strum wear on the table or the 70's electrified one ?
add by Uncle Emile at 10:43 AM 2 comments: