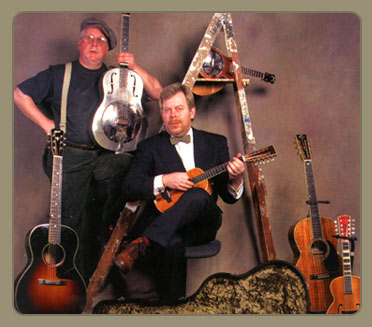 "What is Hokum?… Blues with a smile on it's face "
The legendary british duet use this sentence as a guide and sings "a wide variety of 30’s, 40’s and 50’s country blues, west coast swing, jazz and vaudeville".
Starting their blues career at the South Tyne Folk and Blues club back in the late 60's Jim Murray and Pete Mason plays with great feeling and instrumental skills a wide variety of vintage instruments or accurate luthier copies, acoustic guitars, steel guitars, mandolins, ukulele and of course a tiple , played by Pete.

Pete Mason, In the article I talk of the Hokum Hotshots history that starts in the 60's but you're the tiple player, so let's get specific,when did you played for the first time the instrument ?
I first came across the tiple in the early 1980s, thanks to an old friend, Brian Cookman, who also played tiple. Brian was a great blues and jug band singer and player, and a huge influence on the Hokum Hotshots. He sadly died in 2005.
Have you met Alexis Korner in the 60's 70's? heard his tiple tunes ?
We met Alexis Korner when we played support to him on his last UK tour at a gig in Darlington. I did not realise he played tiple, but I am now looking into his discs to learn more.
Old country music, and prewar blues sometimes met the tiple, also 30's/40's black swing/vocal/strings bands, was some of those artists an inspiration ?
I was not influenced by any tiple players but since have looked at groups such as The Cats and The Fiddle, The Five Cousins and The Spirits of Rhythm. Whilst these groups are interesting, I have not really been inspired by them. I enjoy the songs of Big Boy Teddy Edwards, who showed that blues was well suited to the tiple.
Is your  Tiple a Martin ? did you own other tiples?
My tiple is a Ralph Bown, and is the only one I own.
Your Ralph Bown have been electrified, what kind of inside pick-up instalation is used?
what's your approach to get all those accoustics vintage treasures amplified on stage ?
My tiple is amplified by a Barcus-Berry (or similar) lozenge type pick up. We use Bose amplification on stage with Orchid Electronics di boxes. This combination gives a true amplification of acoustic instruments.
Can you describe your feelings about the particularities of the tiple ?
I love the sound of the tiple. It is unlike any other stringed instrument I have ever played. The balance of its size, the arrangement of the strings, and the sound that comes out of it make it inspiring to play.
Are you an exclusive "pick" player? did you sometimes use a more "uke" technique, with nude right hand, strumms and picking ?
I play tiple exclusively with a flat pick. I’m not sure how else to play it!
What's your tiple tuning and why this choice?
My tiple is tuned B,F#,D,A. This is because I do not usually play in any tunings, and it takes me all my time to master this tuning!
Did the audience sometimes react to the particular instrument and what about musicians met in festivals and blues manifestations?
Wherever I play, the tiple attracts great interest both from musicians and audience as I have yet to meet any other tiple players.
In an duet arrangement did you consider the tiple as  a guitar family instrument or a high strunged , mandolin or uke cousin? could you imagine, as did the "Golden Melody Boys", a tiple/mandolin duet for a tune?
Sometimes I think of the tiple extending the guitar’s range, sometimes as a mandolin-type sound but mostly it has its own sound. The mandolin/tiple duet could well break the sound barrier!
Do you choose the tiple to give a more urban "vaudeville"  piano-roll colour to a song or could it be used also in a pure roots south country blues interpretation?
I like the reference to “piano-roll” colour as this is very much in my mind when we play the music of Georgia Tom Dorsey and Leroy Carr. On the country blues side Tommy Johnson songs seem to suit the tiple, but playing with National steel guitars makes for interesting contrasts.
A last word to our tiple players and fans arround the world?
My view is that there are no limits. If you want to play jazz, blues, country, old-timey, rock and roll or punk- just do it!


Ralph Bown is a country blues oriented renown british luthier and a long time partner for the HH . according to this interesting interview in 1991 he had built 8 tiples, Martin tiples copys.
Maybe I'll post more information in the future. Unfortunatly his site is currently on construction. 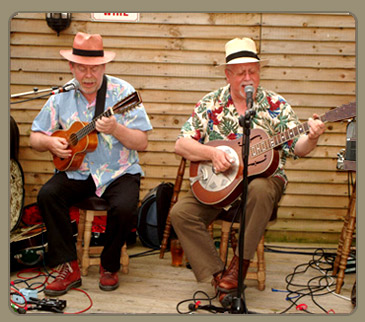